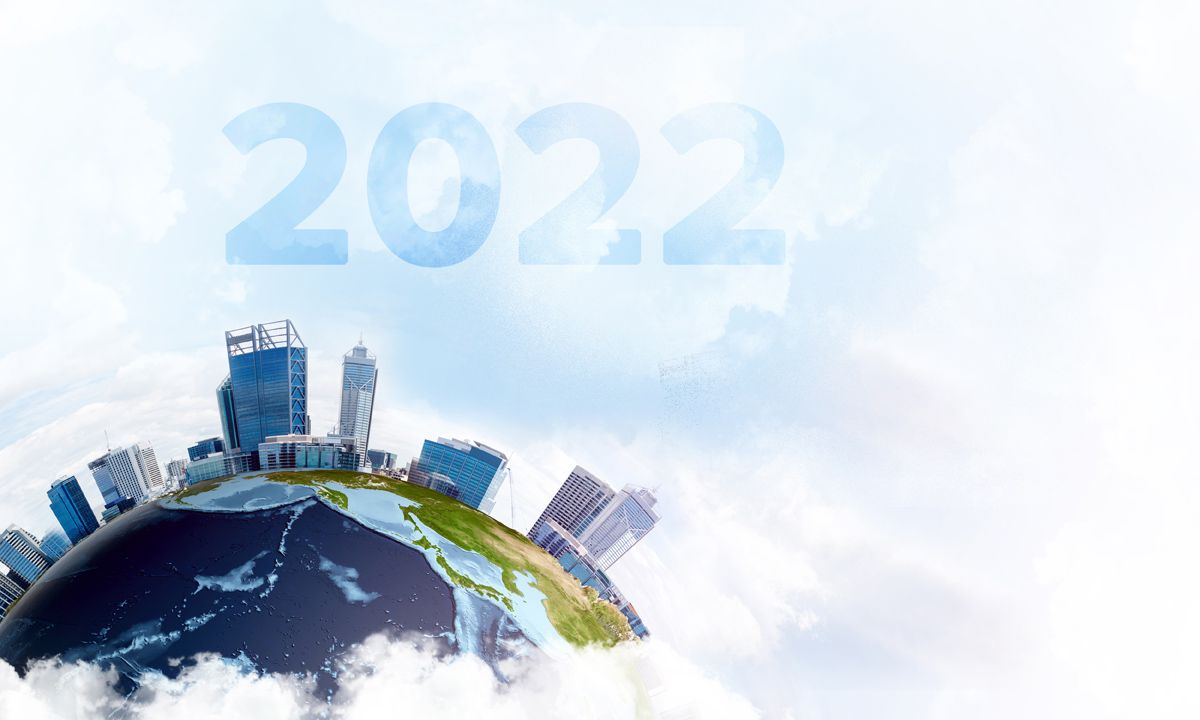 Over the next few years, many projects will be built worldwide, all more disproportionate, atypical, or surprising than each other. These different constructions will however have one thing in common. As well as being innovative, they will be “green”. To get the year off to a good start, in this article we give you a world tour of a few projects that will mark 2022 and, no doubt, the many years to come!

The industry must now meet environmental requirements, from the design phase right through to commissioning. The priority ambition of the construction sector today is to reduce its environmental footprint by planning its projects in a sustainable and responsible way. To achieve this objective, new technology is a major ally. This winning combo will allow you to build the craziest projects!

The construction industry is changing and even bringing on board new methods. The goal today is to embrace eco-construction for less energy-consuming and more sustainable buildings. How? For example, thanks to the use of new materials (self-healing concrete, transparent aluminium, aerogel insulation, smart roads and bricks, etc.) or by resorting to recycling in order to reduce the ecological footprint of buildings to a minimum.

New technology is also making a contribution to this transformation. Right from the construction phase, it allows better project management, enhanced site safety, easier exchanges and data sharing between the different teams... BIM plays a decisive role in this construction revolution. But technological advances also play an important role in the operating phase with smart constructions offering increasing comfort and safety.

This use of new technology associated with ecological issues now makes it possible to build differently, taking into account the well-being of people but also that of the planet. So where yesterday a building's power supply depended on a third-party supplier, now it can be fully self-managed. Similarly, 3D concrete printing now makes it possible to print a house in 24 hours and uses a third of the material, which reduces the environmental impact of construction as concrete is a particularly high CO2 producer.

Throughout the world, whatever the type of building, the major projects that will be initiated or finalised in 2022 illustrate this trend that is revolutionising the world of construction.

World tour of the sites that will mark 2022

A series of major international sports competitions is scheduled over the coming years and countries are competing to build creative, ambitious and innovative projects that nevertheless adhere to sustainable goals in terms of climate, energy and natural resources.

The Winter Olympics in Beijing, China

This beginning of the year will be marked by the 24th Olympic and Paralympic Winter Games to be held in China. The work, which began in 2017, was completed at the end of last year. While the Chinese capital had spent about 40 billion dollars for the organisation of the Summer Olympics in 2008, the budget for the Winter Games has been significantly reduced due to the reuse of certain facilities. This is good news from a budgetary point of view but also for sustainable development. Thus, the emblematic stadium of the 2008 Games, the "Bird's Nest", will host the Opening and Closing Ceremonies, the "Water Cube" - the former aquatic centre - will be transformed into an "Ice Cube" for the curling events and the Wukesong Sports Centre and the National Sports Centre – which hosted the basketball and gymnastics events – will be dedicated to the ice hockey tournaments.

In addition to these transformations requiring immense technical expertise are several sites, not only sports facilities but also a motorway, ski resorts, a high speed train line and athletes’ accommodation. 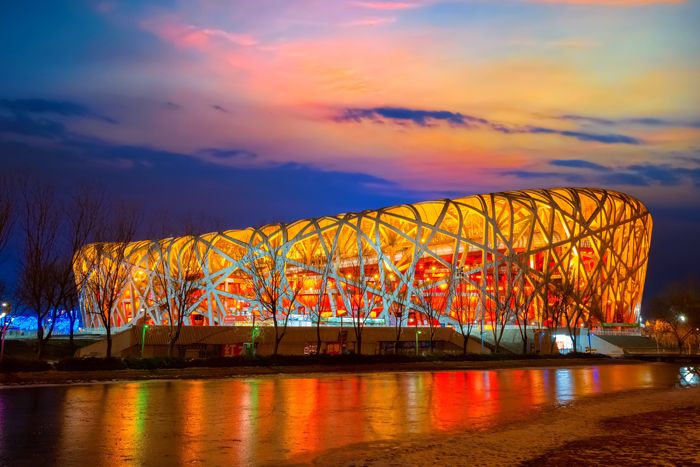 The Guangzhou Evergrande Stadium in China

The Guangzhou Evergrande football club, the leader of Chinese championship, has started construction of its new stadium with 100,000-seat capacity. It will thus join the closed circle of the biggest stadiums in the world. With an ultra-modern design, the structure will be one of the architectural gems of Canton (Southern China).

With a budget of $1.86 billion, the stadium, which was due to open in late 2022, has fallen behind schedule, due to Evergrande Group's ongoing financial problems. Work was halted and the Chinese government has taken over management of the site.

The 2024 Olympics in France

France is preparing to host the 33rd Olympic and Paralympic Games. The overall provisional budget amounts to 7.3 billion euros, made up of two components: 3.9 billion euros for the Organising Committee of the Olympic Games and 3.4 billion euros for the Olympic works delivery company (Solideo). We are a long way from the colossal budgets of previous Olympic Games. Paris put a strong focus on the sustainability of the facilities created and the use of existing infrastructure in its candidacy. We bet that this will allow the Paris 2024 sports facilities to avoid the sad fate that most of those built for the Olympic Games in Athens, Beijing, Rio or even Turin have experienced over the past 20 years.

Solideo is in charge of building the new infrastructure (62 projects), intended to have a second life after the Games. At the peak of activity, in the spring of 2022, 11,000 workers will be mobilised on the various sites.

Three major sites are currently under way in the Greater Paris Area:

> The Olympic Village which will host 15,000 athletes. It will be the largest "mono-site" . It will extend over 300,000 square metres and will subsequently be transformed into a residential, commercial and office district.

> The media village will receive journalists from all over the world before being transformed into a new district of 1,300 housing units with two schools, a nursery, a gymnasium and shops.

Several, ever taller towers are planned or currently rising from the ground. Will the Burj Khalifa, the tallest building in the world since 2010 which culminates at 828 metres in the sky of Dubai, be finally dethroned?

Located in Saint Petersburg, it will be the tallest tower in Europe and the second tallest tower in the world at 703 metres high. This new 150-storey, conceptually designed skyscraper will include offices, accommodation, recreation areas and the highest vantage point for a building of its kind.

The architectural concept was presented on 25 May 2021 and is expected to be completed within the next few years.

The Jeddah Tower in Saudi Arabia

Another project that is reaching new heights is the Jeddah Tower, a one kilometre high skyscraper project!

Located in the city of Jeddah, it will be part of the Jeddah Economic City, an urban project covering more than 5 million square metres and estimated at 20 billion dollars.

Although the construction of this skyscraper started in 2011, the work has been plagued with delays. 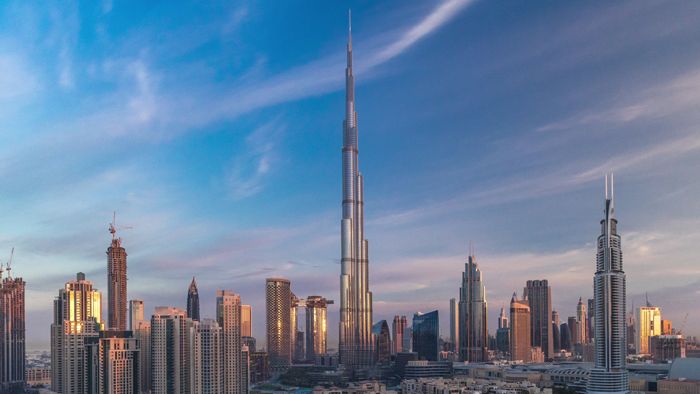 To shorten journeys and bring people closer together, ever longer tunnels will soon see the light of day.

Born in 1991, this freight and passenger line project aims to reduce road traffic between France and Italy by improving rail links. By prioritising rail transport over road traffic, this transalpine link will reduce emissions by 370 tonnes of CO2 per day!

270 kilometres long, this line which will connect France to Italy through the Alps and will be 89% underground. The main tunnel will consist of two parallel tubes to separate traffic directions and more than two hundred transverse galleries for emergency evacuations.

With an overall budget of more than 8 billion euros, it is scheduled to open in 2030. 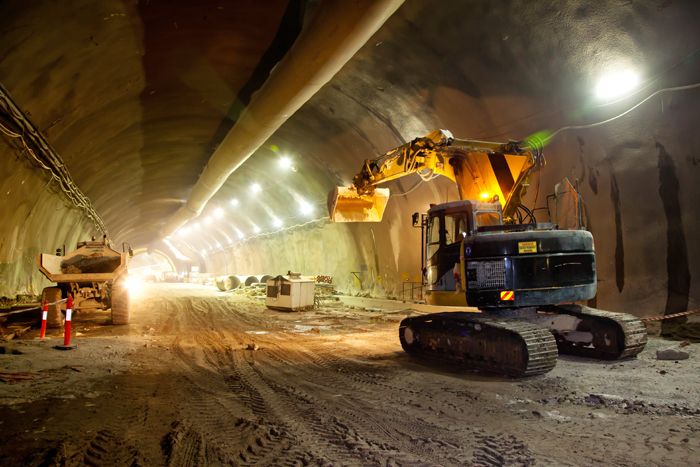 A world first as part of the current 40 billion euro construction of the European route E39, its objective is to eliminate ferry crossings and speed up traffic on the west coast of Norway. While the idea of a floating tunnel is not new, the concept has never been implemented.

1,100 kilometres, a 21-hour journey and several ferries are currently required to travel along the fjords on the west coast of Norway. This bridge, immersed at a depth of 30 metres, crossing almost 8 fjords, should cut the current journey time by half.

By reducing the length of the journey for vehicles and cutting ferry traffic, whose greenhouse gas emissions and fine particle emissions are very high, thousands of tonnes of CO2 will no longer be discharged every day into the atmosphere thanks to this floating tunnel.

Estimated at 30 billion euros, the project should be completed by 2050.

4. Towards new types of construction

Original constructions will soon appear in various sectors, thanks to the use of new design models, new manufacturing / construction processes, and even new types of materials.

The Sara Cultural Centre, in Sweden, the tallest wooden tower in the world

In the race for the tallest wooden tower in the world, the Scandinavian countries have gained one more place in the ranking. After the Mjøstårnet, in Norway, at the end of 2021, Sweden inaugurated the Sara Cultural Centre, in Skellefteå, in the north of the country. This 20-storey, 80-metre tall building, made of local sustainable wood, hosts a cultural venue and an ultra-modern hotel.

Elsewhere in the world, other projects are already in the pipeline: The PLP Architecture firm has drawn up proposals for three wooden skyscrapers, including a 300-metre high tower in central London, while the Japanese company, Sumitomo Forestry, plans to spend 5.6 billion dollars on the construction of a 350-metre tower in 2041 to mark its 350th anniversary.

It should be noted, however, that if the results of studies prove that this type of building remains more expensive to produce, there are ways to lower costs of materials, such as the possibility of prefabricating wooden elements.

Within the Paris-Saclay urban campus in Palaiseau (Essonne), a "techtiary" area of 10,000 square metres will allow total office/laboratory reversibility for "MedTech" companies. Particular attention will be paid to the aesthetics, environmental identity and energy management of the project.

The work should be completed within a few years.

A neighbourhood of 3D printed houses in the United States

In Austin, Texas, a new kind of real estate project will emerge in 2022: an entire neighbourhood consisting of one hundred houses printed in 3D by construction robots. Completing a house in about a week is a big plus when you consider that the United States has a deficit of 5 million new homes.

As solid and durable as traditional housing, these printed houses must withstand extreme weather conditions and will be equipped with photovoltaic roofs, a significant ecological asset. 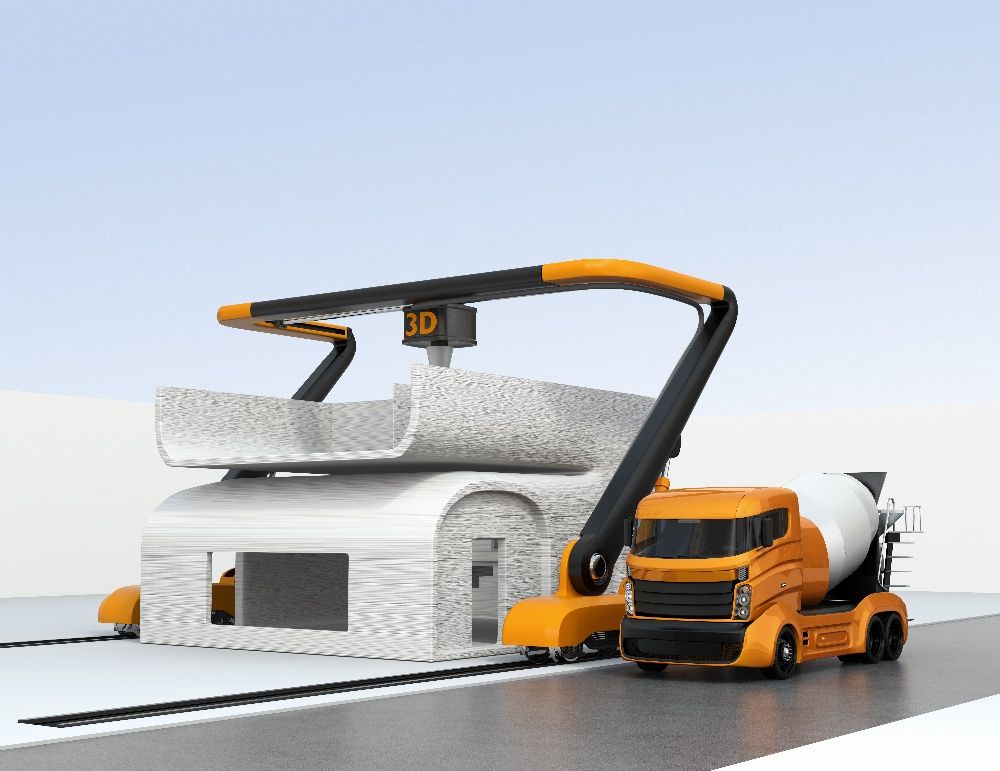 Other constructions have surprises in store for us in the coming years.

Vrindavan Chandrodaya Mandir, in India, the largest temple in the world

In Uttar Pradesh, the Vrindavan Chandrodaya Mandir, dedicated to Krishna, is currently under construction. This gigantic temple will be the largest in the world, ahead of the mosque of Hassan II in Morocco or Saint Peter’s basilica in Rome. 210 metres tall, it should even accommodate an amusement park, a heliport, an artificial waterfall and housing. The $1.05 billion project, funded by the International Association for Krishna Consciousness, began in 2014 and is expected to be completed in 2022.

Work on the largest floating solar power plant covering about 3.2 square kilometres with a capacity of 240 MW will be launched in 2022 on the reservoir of the Nam Theun 2 hydroelectric project (Khammouane province) with commissioning scheduled for 2024.

The hybrid construction will operate the solar installation connected to the hydroelectric installation (1,080 MW). The objective is to save water: when the sun shines, hydroelectric production decreases and less water is used, stored for the dry season. 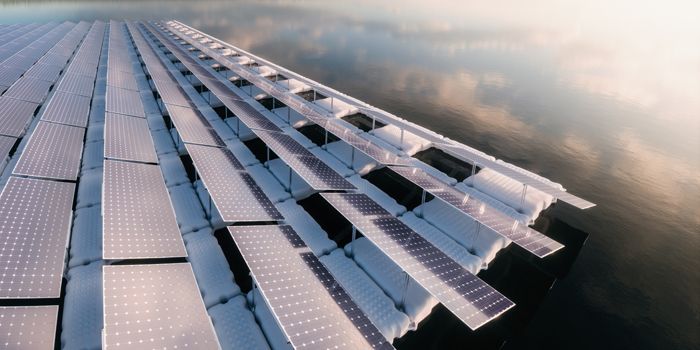 Telosa, a utopian and futuristic city, in the United States

Billionaire and former Walmart executive, Marc Lore, and famous Danish architect, Bjarke Ingels, unveiled plans in 2021 for Telosa, a sustainable metropolis they hope to create from scratch in the American desert.

The ambition of this mammoth project of 340 billion euros is to create "the most open, fairest and most equitable city on the planet" with an architecture design that respects the environment, sustainable energy production and a drought-resistant water supply system.

Are you looking for tools to digitise your worksites?

Let's talk about this together. 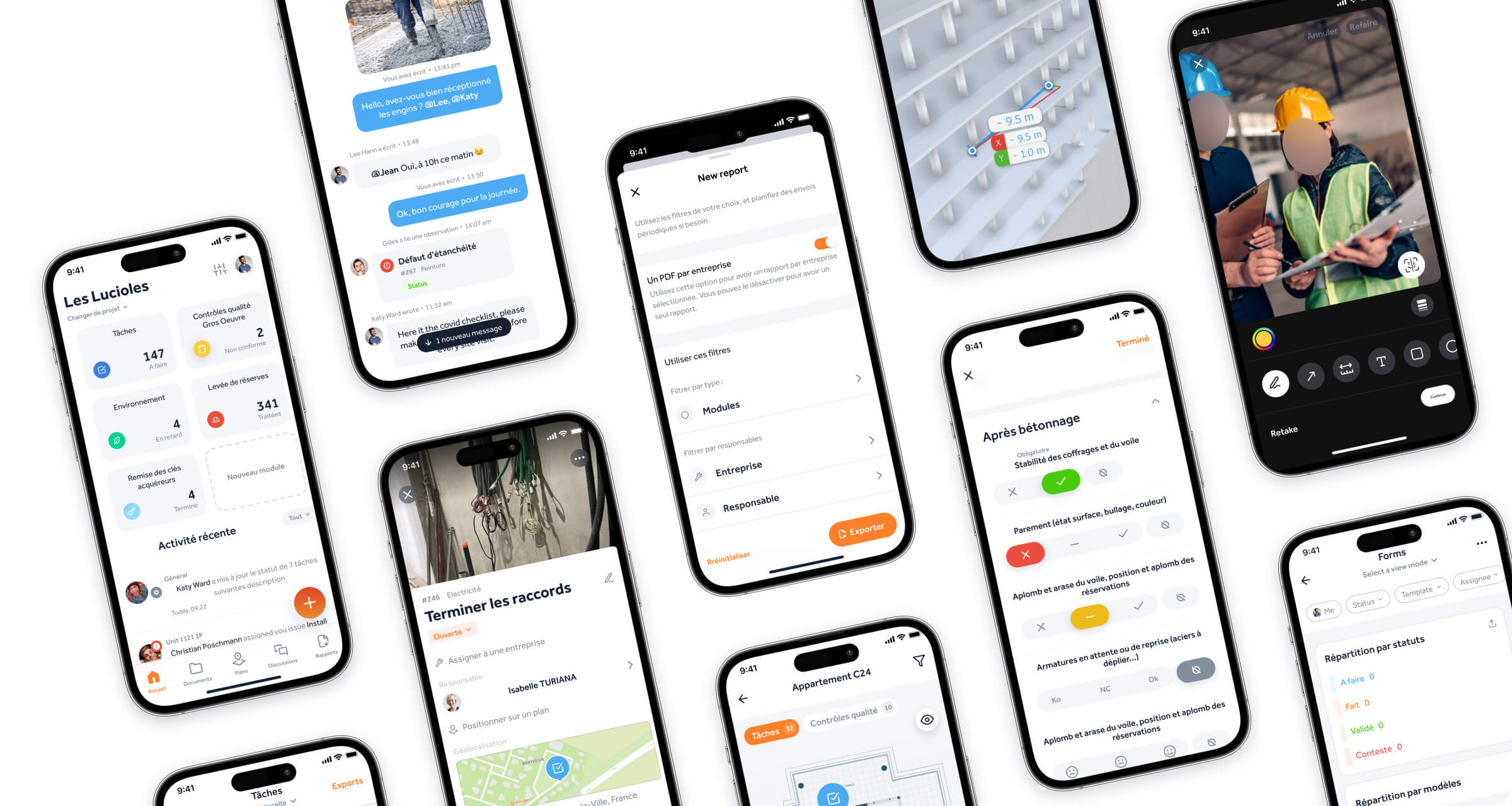 Finalcad One Year In Review 2022

In 2022 and thanks to the feedback from our users, the Finalcad team have worked hard to bring you r... 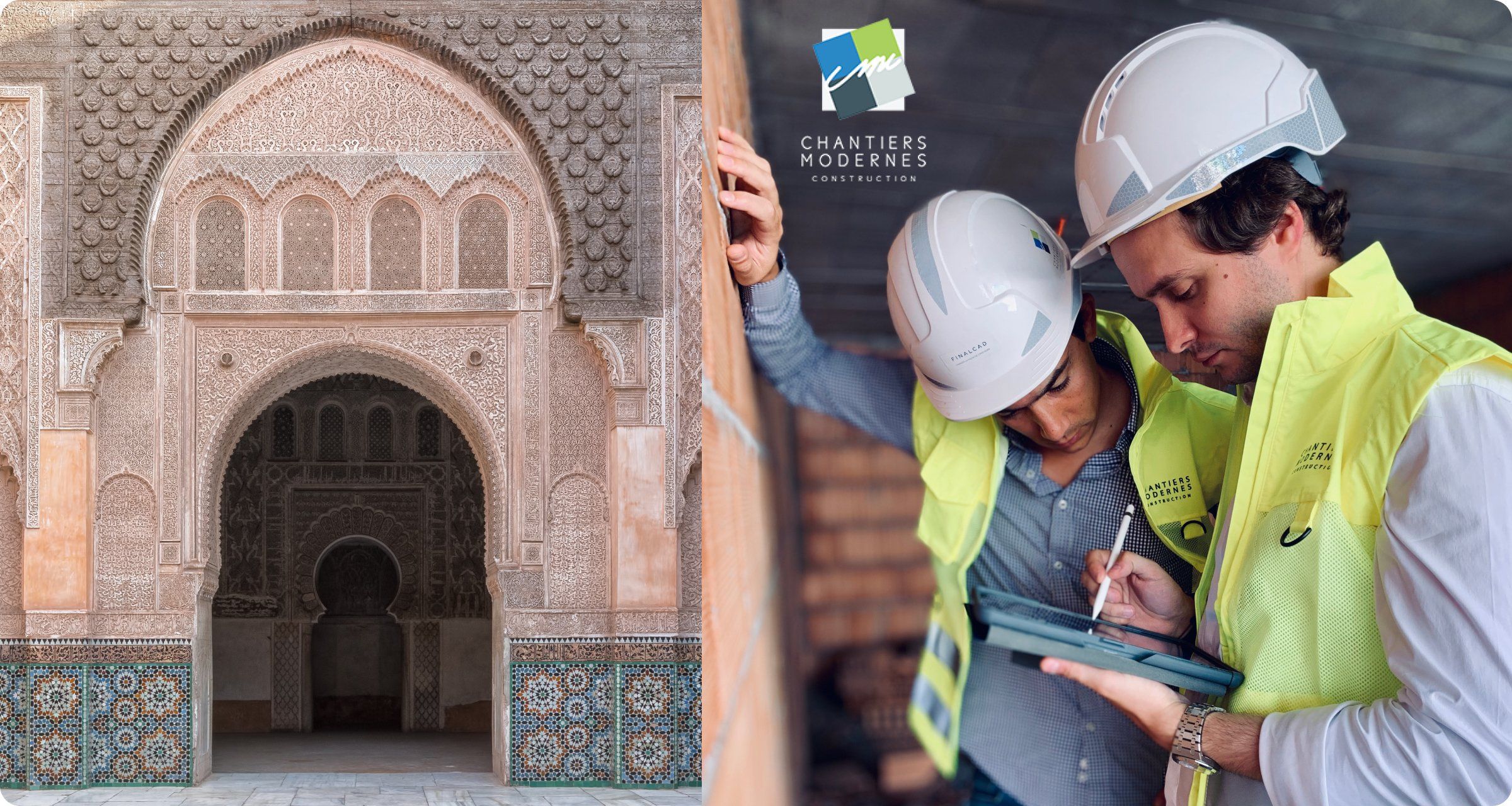 Morocco: the construction revolution is ...

Since 2018, Chantiers Modernes Construction and Finalcad have combined their expertise to digitalize...

Over the next few years, many projects will be built worldwide, all more disproportionate, atypical,...